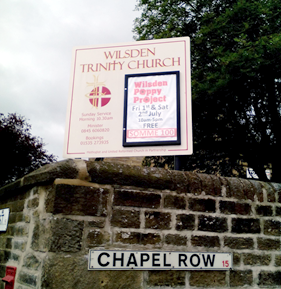 I suppose it started with the Tower of London poppies. Somewhere in the dim recesses of my mind, I lodged a thought; “You could do that on a small scale with knitted poppies”.

It surfaced again at the beginning of this year in which we would see the Somme centenary. The first day of the Battle of the Somme was a critical event in Bradford’s history. In 1916 everybody knew someone who was there. An estimated 2,000 Bradford men, mainly in the ‘Bradford Pals’, were thrown into the big push that day. 1,770 of them were killed or wounded, that was nine out of every ten men.

“1,770 poppies” I thought, “that’s achievable”. So I went to the Stewards and Elders and said “I’ve been thinking”. This tended to make them roll their eyes a bit, but they agreed we could go ahead. 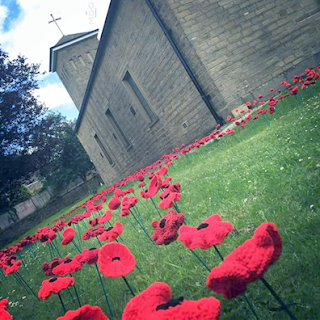 The first call for poppy knitters went out to Wilsden residents in the Easter edition of “Village Voice” magazine. Not much happened. I needed help, someone as organised as I am disorganised. Sharon! Thankfully she said “Yes” and the call for poppies went circuit-wide and there was definitely some interest but so far only about 100 poppies. Then they suddenly began to appear – left under my seat on Sundays, in buckets at Wilsden Pharmacy and the Village Hall, and in bags delivered to my work.

Sharon suggested a WW1 post-Sunday-service lunch to enrol volunteers for the event. We put on a lovely spread of jam, dripping, sardine and corned beef sandwiches. It went down a storm.

I must have been a great trial to Sharon, but she kept me sane. I had so much of this in my head and knew how it would vaguely look, but articulating it into a vision she could share must have been like getting blood out of a stone. She was incredibly patient even when I was still making magic lantern slides with just three hours to go before a paying public arrived. I do like a deadline. 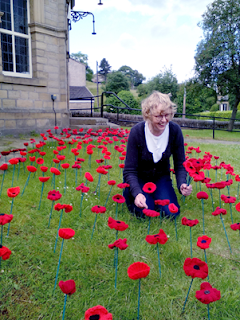 Poppies kept on coming. With about ten days to go we reached our target. Now there was another problem – it was like trying to stop a super-tanker!
It didn’t matter though, as the British Legion said they’d be delighted to take as many poppies as we knitted.

On the day before the centenary, Thursday, we set up the display inside the church. We had hired a box of WW1 items, usually used in schools, from a company which Sharon had found, in Leeds. It included a Mills bomb and replica rifle. Was it appropriate to display them in church? The Leadership Team said “Yes, it’s all part of the horror of war”, and it felt right.

Friday morning, July 1st, seven of us arrived in the churchyard at 6am. It took us an hour to plant the poppies. It was very emotional process;  “This was a man, and this, and this….” Then at 7.30am, zero hour, I blew a blast on the whistle and we held two minutes silence. The century’s span seemed to contract to an instant in the hush.

In the prayer of remembrance which broke the silence we thought of all soldiers who have died in the cause of upholding our rights and freedom and we made that solemn promise  “We will remember them”.

And the doors opened, and people came. And they said kind things about what we had done. And they gave generously to the British Legion. 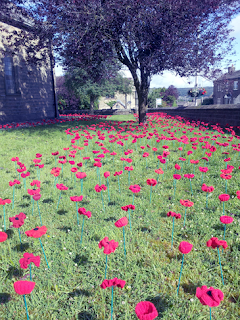 To everyone involved in any way, knitters of poppies, visitors, helpers, every single one of you, thank you so much for being part of this Somme tribute.

“When you go home tell them of us and say
For your tomorrows we gave our today.”
We will remember them.