By Bradford North Circuit August 07, 2016
On the weekend of 1 – 3 July, Wilsden Trinity Church presented a wonderful display to commemorate the 100th anniversary of the start of the Battle of the Somme in 1916.

All the churches in the circuit were invited to knit 1,770 poppies, equivalent to the number of Bradford Pals who died on the first day of battle. There was a marvellous response, and more than the required number of poppies were produced. Members of Trinity, guided by instigator Jane C, got up early on 1 July (before 6.00 am!) and planted the poppies in the church grounds. They stopped at 7.30 am, for two minutes silence to coincide with the exact time the battle started. 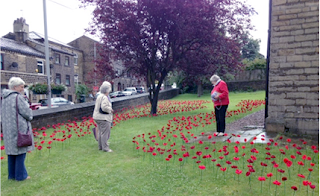 Inside the church, an amazing exhibition of mementos, artefacts, books, articles and pictures had been assembled, which brought home the horrors of that awful event, in many cases bearing testimony to the experiences of local men, from letters and personal accounts.

On the Friday evening, Gordon B read extracts from the memoirs of a Wilsden soldier, to the accompaniment of a picture show put together by Jane C.

Thank you, Wilsden Trinity, for teaching us so much about our history.