By Bradford North Circuit August 07, 2016
St Andrew’s Luncheon Club received an invitation from Peel Park Primary School to attend their celebrations for the Queen’s 90th birthday. We were advised that Steve would come to collect and return all who wished to attend. There was to be tea and cakes, followed by entertainment from the children, and then flag-waving and cheers for the Queen, outside in the playground, weather permitting!

We accepted the kind invitation and so had a slightly earlier lunch. We were collected by Steve at 1.00 pm and driven down the hill to school, where we were received by our very courteous designated staff. They were really caring and helpful. We were treated like royalty!

The school hall was decorated with an abundance of red, white and blue. The student ‘king’ and ‘queen’, complete with crown, robes and throne, sat at the head of the top table, alongside the Lord Mayor, Cllr Rev Geoff Reid and the Lady Mayoress, the headteacher and other dignitaries. 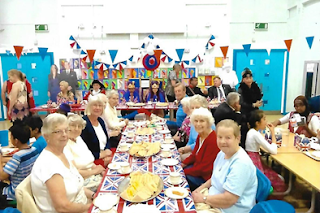 We were seated in front of the top table and the staff waited on us, producing a delicious array of sandwiches, cakes, trifles, yoghurts and other wonderful fancies, which we enjoyed in small amounts. We could not do justice, as we had just eaten a two-course hot lunch! But we tried, so as not to appear ungrateful.

Next came the entertainment, so off we went to the other end of the vast hall. We were escorted to our seats, and then in came 700 – yes, 700! – children, class by class, Each child carried their own Union Jack, to be waved at the appropriate time. They did extremely well to sit patiently for the time it took for the whole school to assemble for the concert; we were impressed by their good behaviour.

Each singing group, choir and glee club was introduced and sang so tunefully and expressively. A visiting choir from Greengates Primary School also performed for us. All the choirs performed so well in front of a large audience. I am sure the staff were very proud of them all.

The afternoon’s festivities ended with a whole-school rendition of ‘God Save the Queen’ and ‘Happy Birthday, your Majesty’, followed by flag-waving. Can you imagine 700 flags waving? It was a very impressive, and a quite moving sight. 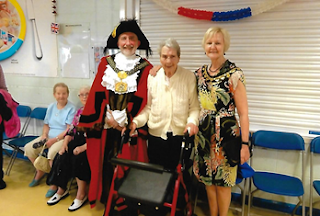 Last but not least, our very own Vera W was also celebrating her 90th birthday, and the children and staff sang to her too. What a joyous moment and one to treasure, especially having her photograph taken with the Lord Mayor and Lady Mayoress.

We had a lovely afternoon and enjoyed great hospitality from all at Peel Park Primary. Steve, our trusty driver, delivered us back to St Andrew’s after a busy, eventful, different and super Friday afternoon.