By Bradford North Circuit January 21, 2016
“So glad that Paul, the weatherman, got it wrong!”

The week before Christmas, St Andrew’s held their annual outdoor carol service. Numbers have declined over recent years, so we decided to do things a little differently.

Despite the terrible weather forecast of continuous rain and potential high winds, we still met as planned and God provided us with a mild and dry night. 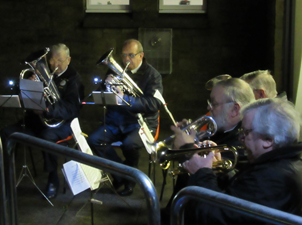 The evening consisted of carols led by some members of West Yorkshire Brass; a light parade led by Joseph, with his donkey hand puppet, Mary and an angel with a sparkly star; and a nativity tableau by the Junior Church/Youth which gradually formed between carols and narration. We finished by chatting over coffee and mince pies inside.

Around 150 people attended including many from our uniformed organisations. Some Guides even gained their carol singing badge that night.

As the brass band were thanked, they remarked on how uplifting the evening had been with so many young people being present and joining in. So we quickly booked them again and look forward to sharing Christmas with Undercliffe again later this year!


Celine V  (a Soupermum!)
Where can new mums go, to have lunch where it’s warm and safe and you get to eat fresh soup and homemade cakes, while someone holds your baby? Too big an ask? Not at Wilsden Trinity! Every Monday lunch time, young mums come together and turn the gi…
Post a comment
Read more