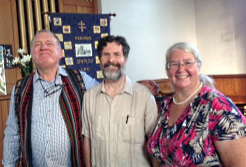 On Tuesday 14 July, Dr John and Mrs Sharon Harbottle, Mission Partners working in the Caribbean island of Haiti, visited the circuit and gave an illustrated presentation about life in Haiti following the earthquake of 2010 and their work amongst vulnerable people. The event was attended by around 50 people, who enjoyed afternoon tea, before the presentation, courtesy of members of Northcliffe Church.

Sharon is a teacher and she spoke about her role in education on the island and in recruiting and training local preachers, with which she has made a significant impact. John is a GP, with specialist knowledge of AIDS and he spoke of the major contribution of the Church to medical care, including the relief of malnutrition. It was fascinating to hear of a preparation made from peanuts, which can dramatically turn round the fortunes of malnourished children within less than a week!

2017 will be the 200th anniversary of a Methodist presence in Haiti. It is interesting to note that the Methodist Church was invited in 1815, by the then President of Haiti to establish a presence on the island. Arrangements came to fruition in 1817, and the Church has made a tremendous contribution to the life of Haitians.

At the end of this informative and enjoyable event, a collection was taken up, to help the work of the Harbottles and £ 533 was raised. Many thanks to all who helped with arranging and putting on the event and to those who donated money so generously. This Haitian cross was given to the circuit as a memento.