By Bradford North Circuit October 04, 2015
At Haworth Road Methodist Church, we celebrated our 19th annual children’s holiday club, during the last week of July, based on a theme of Frozen Fun. 26 children (aged 5 – 10) took part and enjoyed activities for 2 hours each morning, linking the film of Frozen to various Bible stories.
Two story-tellers related stories from both the film and from the bible and the main link which developed was one of friendship, identifying the friendships which developed in the film, the friendships which the children developed with each other throughout the week’s activities, the friends Jesus had during his ministry and teaching that Jesus is a friend to us all.

Lots of fun was had making model fishing nets (complete with fish), making beautiful snowflakes using only sheets of paper and scissors, building (flat topped roof) houses out of paper and also making little Trolls (film characters) out of marshmallows and cocktail sticks. Lots of ingenuity was evident in all of the various designs!

The children also learnt and sang choruses each day using sign language and gave a wonderful rendition of these on the final day when parents and church members attended the final session. 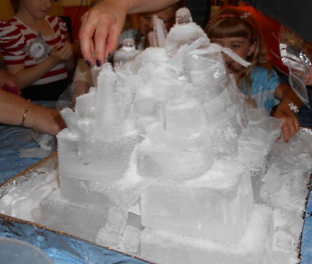 The final activity, which proved to be the highlight of the week, was the building of two huge Ice Palaces from blocks of Ice, in varying shapes and sizes, these came from staff members freezers (it is amazing how long ice stays frozen when you join them all together in building blocks). A stunning addition to the Palaces were quantities of artificial snow which the children mixed themselves and spread around with gusto!

Many thanks to all our volunteer helpers and we now look forward to our 20th anniversary next year. In the meantime we can now all restock our freezers with food!