A parting message from Rev Ian 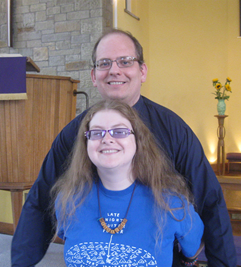 It is hard to think that Tabitha and I have been in Bradford for 5 years.  At times it seems like just yesterday that we arrived.  At others, it seems like we have been here forever!  In reality of course it is only five years.  But what years!

When we arrived the Bradford North Circuit was launched, and we were starting a new adventure.  What does it take to create a new circuit?  Perhaps a lot more than any of us really imagined.  In these five years a lot has happened.  We began life as a new circuit.  We discovered uncomfortable truths that had to be addressed, and addressed them.  We had to rethink how we would have to work in the light of fewer, limited resources.  We have taken time to try and understand what God is calling us to, as local churches that make up the Circuit, in order to discern how best to use the gifts and graces that God has given to us across the circuit as a whole.  We have welcomed new staff and said fond farewells to others.  All of this, in addition to the every day mission and ministry that involves us all.

In a very short time, Bradford North Circuit has travelled a long way, quickly.  A defining characteristic of our time in Bradford can be summed up in the word ‘change’.  We have seen a lot of it, both in the churches and circuit, and in our home.  As we look back over our time here we rejoice, because we have been able to see God at work in people, even in church and circuit committees!  God has taught us the meaning of waiting and discernment.  So often we would like this to have been faster, quicker, sorted out so that we can just get on with what we might consider to be the real business of being God’s Church.  However, when we read our scriptures, waiting and discernment are characteristics of how God has gently, and at times firmly, led his people.  Why should we be any different?  And in each time, including ours, God places the right people to help us, guide and encourage us and draw us closer to Him.  Of course, as God continues to lead us, there will be continue to be change.  Of that I have no doubt.

It has been a privilege to travel these last five years with you.  It has been a privilege to see individuals grow in their understanding of God.  To see people grow into roles they never imagined they would have, yet are clearly gifted for.  To see churches, and groups within churches, allow people to grow and to change, without expecting perfection first.  Rather, encouraging and supporting one another.  To discuss with people issues that are important to them, and give them the safer space to ask questions of things we do, just because we do them, often ignoring the ‘Why?’.  So often, it has felt like I have been part of a ministerial team – and I don’t just mean with my ordained colleagues, good as that has been.  No, I mean the ministerial team which is made up of all the members of the Body of Christ, each and every one of us.  At times I have led worship, more often I have worshipped with.  I have frequently been touched by the care and dedication of our pastoral visitors - the unsung missionaries and ministers of the church, whose consistent work underpins so much more - as I have so many of the quieter roles that people undertake to further the building of God’s kingdom.  To you all, I am very thankful.

And now, it is time for Tabitha and me to move on.  Leaving Bradford will not be easy, for we have come to love both people and place.  However, there is a hymn, “The Enemy of Apathy” (393 Singing the Faith), which points to the continual movement of God and the expectation of wonders that God has yet to reveal to us in our lives.  The hymn also says of the Holy Spirit of God that it cannot be captured, silenced or restrained.  My prayer is that you will not even try to capture, silence or restrain what God is doing among you.  Rather that you will continue to be open to the Spirit’s leading, being ever thankful to God for all that he reveals to you.

So, off to Abingdon we shall go, praising God for all of our time in Bradford, and trusting in God for whatever awaits us in pastures new.

May you know the joy of the Lord in all things.