A tribute to the late Keith Bolton 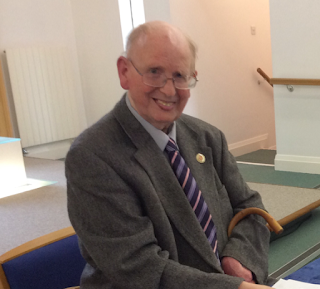 Keith Bolton started studying to become a Local Preacher following the death of his parents, for whom he had cared and became fully accredited in 1991.

Keith was born with cerebral palsy and spent his formative years at Lister Lane Special School. He qualified as an accountant and that was how he spent most of his working life. He put his financial expertise to good use for the Methodist Church, acting as Financial Steward in the former Woodhouse Grove Circuit. He was also the disability adviser for the West Yorkshire District.

Helping those with disability was Keith’s passion. He was keen to promote good access for all to public buildings and to public transport and spent hours on various committees, advising people and putting his own experiences to good use. As well as having cerebral palsy, over the years Keith developed other debilitating illnesses, but he never let them get in his way and he would always make light of them.

He loved preaching and would lead worship on most Sundays, not just in the Bradford North Circuit, but in other circuits in West Yorkshire and some in the Leeds district. Also in churches of other denominations.

He led services as long as he was physically able to get out of his house, which latterly meant remaining seated throughout each service.

Ecumenism was another of Keith’s passions. He was a keen and faithful member of Churches Together and was on the committee of Churches Together in North Bradford from its infancy up until his death. He loved the social side of church life and he liked to sit by the entrance door at events to welcome everyone with a smile and a chat when they came in.

Keith’s Christian message was simple and sincere. He preached God’s Love is for all. He preached kindness and generosity between all humankind.

He was involved with the Spastics Society, which later became Scope, for over 40 years and loved to tell us tales of their social gatherings, especially the Christmas parties.

Keith died peacefully in Leeds General Infirmary on 6 September after a fall at home, in which he sustained 2 fractured vertebrae in his neck. After a happy lifetime of service, which wasn’t without its struggles during his 71years, he is now at peace with our Lord.