Christians suffer persecution in Pakistan – and in Bradford! 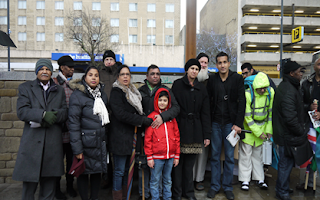 A peaceful protest meeting was held in Bradford, to protest on behalf of a Christian brother, who converted to Christianity from Islam a long time ago with his family. He has had many atacks on him and recently he was attacked near his home by Muslim extremists, who left him with a broken knee and a broken hand.
The peaceful protest was organised by the chairman of the British Pakistani Christian Association and was attended by people from Leeds, Bradford and nearby areas. There were people present from all different religions, such as Muslims, Christians, Hindus, Sikhs and Jews.

This protest was covered by the Telegraph and Argus newspaper and BBC Radio Leeds was also present at the protest. Saleem was interviewed by Radio Leeds and mentioned that we need to urge the Police and the UK Government that these extremists need to be discouraged from doing these things in the future and should be brought to justice.