It’s a snip at Wesley’s 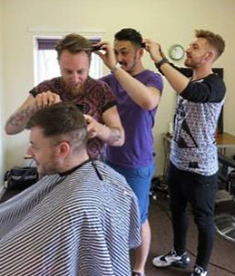 Everyone who’s ever dined at Wesley’s knows what a "snip" it is, but the snip went a stage further in June when the Gents Quarter Barbershop took over cosy Room 2, while their Baildon Westgate shop was being refurbished.

A few from Baildon MC have been regular customers since they opened and a couple of months ago, whilst in one of their three chairs, they said they’d be having to close for three weeks to do up their shop.  We said "why don’t you open a pop-up barbershop in the Methodist Church...? "

To cut it short, they came and looked and they liked.  We talked to Lindsay (Lettings) Sykes, who managed a tweak of the room rota.  One of the Cell Groups was a bit disconcerted that they had to move from their usual room, but they now prefer Room 3's intimacy.

We pointed out to the folk in Wesley’s that any males they didn’t recognise were likely to be customers of GQ; and we encouraged Wesley’s staff to engage with them.  When the oldies in Wesley’s kitchen saw how dishy the GQ barbers looked, no further urging was needed. ‘They were a delight,’ they said.

It worked both ways.  GQ's director, Claire Giffen, baked some cup-cakes to sell in Wesley’s as a thank you.  When her kids were younger, they’d gone to the Marley Hut pre-school and she used to lunch with the other ‘Yummy Mummys’.  As a result of GQ being in the building, she realised how much she’d missed those times and has made a pact to come in for lunch more often.

It was a way of supporting a local business, but we’ll be honest – we also saw this as an opportunity for witness and mission, a way of generating a new footfall, and over the period of their occupancy, over 1,000 new folk came in, experiencing the building and its surroundings.  Being able to use the premises and experience the welcome gives an invaluable positive message.