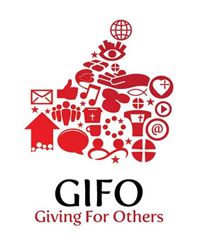 Baildon MethodistChurch’s Fundraising Strategy Group found that the Church had been making donations to a variety of bodies from collections without telling anyone!  They decided that people should know precisely what funds and charities they give to, so two years ago, the system changed and a new system of monthly ‘Good Causes’ replaced it.

The new system is called Giving For Others, or GiFO for short.  The logo is a “Thumbs up” sign made from about 20 images and logos used elsewhere in the Church.  Each year regular causes are set aside certain months:  Mission in Britain;  MRDF, now known as ”All We Can”;  Action for Children; and other charities compete for a space in the calendar.  February 2015’s charity was Toilet Twinning. The Blenheim Project, BEACON and the Bradford Soup Run have all had their turn.
Laminated notices are placed at each entrance to the Church, with a stack of envelopes inviting Gift Aid donations.  The amount given each month is variable depending on the popularity of the cause.  Some causes that we judged very important did not attract many donations - the excitingly-named “Fund for Presbyters and Deacons”, for instance.  Not knowing what a presbyter was and not having a deacon, the congregation were a bit bemused about why they should donate to this, actually, very worthy cause.  We have found other ways of supporting the work with retired ministers and those in distress.

We feel that it does us good to be able to choose a focus for giving each month, and members of the congregation look for the notice to see which worthy cause has made it to the top of this month’s list.  We are humbled to discover something of the wonderful work that charitable groups do in the world and glad to be given an opportunity to support some of it with our prayers and donations.