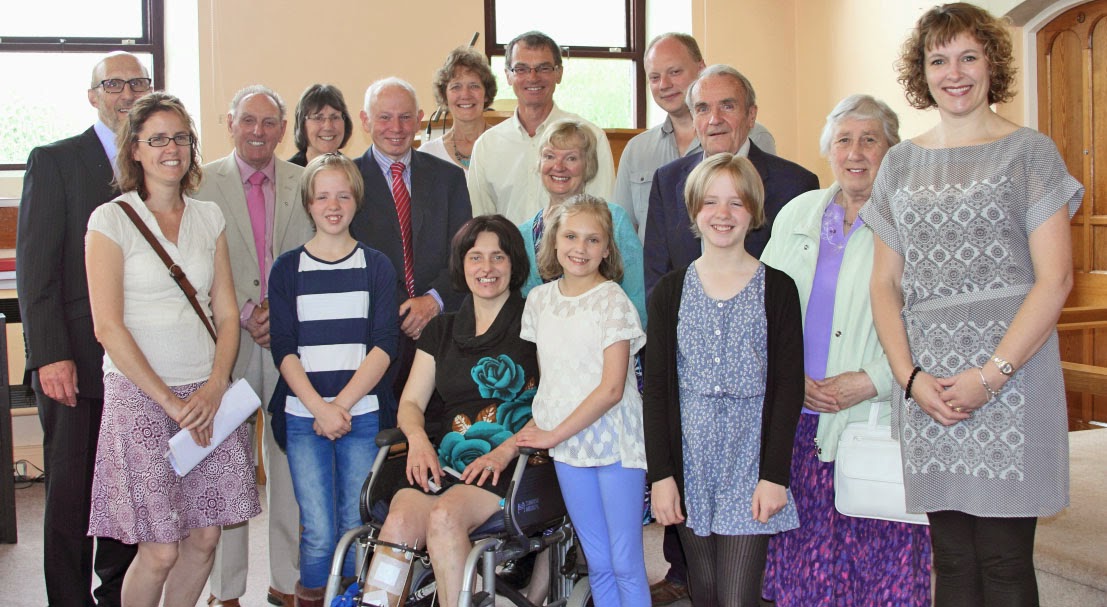 It was a joyful occasion when seventeen new members were welcomed into Baildon Methodist Church on Sunday July 6th. All affirmed their commitment to following the way of Jesus within this local church. A party feel was introduced as each new member was sprinkled with glitter – a sign that they are ‘God’s lovely people’.
Baildon Methodist Church, the product of four mergers, functions as a vibrant hub for the community of Baildon, a town of 18,000 people.  About 60 groups use the premises, involving over 1000 users per week, a third of whom eat lunch in the volunteer-led Wesleys Fairtrade Café.  The church won Eco-congregation awards in 2009 and again in 2012.  Membership, at 180 souls, has been falling in recent years and, in common with other churches, this one constantly saw its teenagers leaving without becoming members, despite extensive youth work.
For 15 weeks at the beginning of 2013, the church undertook to study the Jesus-Shaped People program developed for Anglican churches by Rev. Canon Gordon Dey.  This involved every part of the church: prayer groups, cell groups, the four o’clock service for young families, and all 15 pulpit fillers: all studying what we know of the character and actions of Jesus from the early Gospel accounts.  His focus on the poor and outcast; his use of direct speech and lack of theology; his spotting of talent in everyone and his formation of team work; his constant retreat in reflection and prayer; his unflinching criticism of the scriptures and the religious authorities, speaking truth to power.
Following on from this course, many changes are being implemented in the church, and seventeen new members were welcomed on July 6th.  Each candidate was approached individually and “called by name” to enter into membership. Each will be allocated a pastoral visitor from the growing pool of 30.  The traditional admission to membership seems to assume that candidates are applying for a privileged position and must demonstrate loyalty by giving up eight evenings to be instructed. They then have to assent to a mediaeval creed. Why do we pretend that any church is united by a common belief set? The only requirement for entry, surely, is to love God through our neighbours and our care for creation, and to want to join the church?
This church decided that preparation for entry could be compressed into four, one-hour sessions, in which candidates had a go at creating their own creed and orders for living, and learned something of the specialness of the Methodist Church.  Members have plenty of opportunity to study following their affirmation as members.
What has made the difference? Baildon Methodist Church manages its own affairs within Methodist CPD.  A lay leadership team meets fortnightly to deal with day to day issues; a voluntary lay pastor supplements the work of the Circuit’s Ministerial Team, in a circuit where presbyters are spread widely; people on the edge are invited individually to fill new and existing roles that accord with their experience and enthusiasm; the church is open to instruction by its new members, learning from them as well as teaching them; children are placed at the centre of the life of the church.
Baildon Methodist Church is a church that is trying to become more Jesus-Shaped throughout, with some dramatic results.
Dr Mervyn Flecknoe (Lay Pastor)
Revd Sarah Jemison (Circuit Minister)