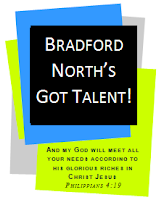 "For it will be like a man going on a journey, who called his servants and entrusted to them his property. To one he gave five talents, to another two, to another one, to each according to his ability. Then he went away. He who had received the five talents went at once and traded with them, and he made five talents more. So also he who had the two talents made two talents more. But he who had received the one talent went and dug in the ground and hid his master's money ..." Matthew 25:14-30
Why don't you take up the Circuit Talents Challenge by taking a £5 note and making it grow for the Circuit?
More details ...